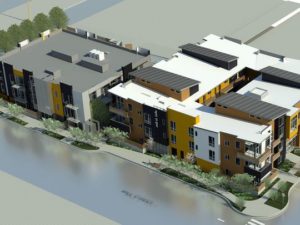 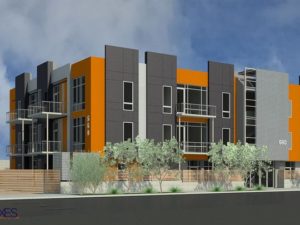 Will Mill Street become the next part of downtown Reno to revitalize?  Maybe. A developer is working to renovate an office building and adjacent parking lot into 50 new condominiums, called Mill Street Lofts, near HabeRae’s Urbanito office space, bungalows and a brewery-distillery.

“The outside will change drastically,” developer Michael Mardian said of the office building conversion. “You wouldn’t even know what it was before.”

Mardian bought 560 Mill Street and, once the last tenant moves out, will be stripping the three-story concrete office structure down to its bones then rebuilding it. The parking lot next to the current building will also be replaced with a matching three-story condominium under one homeowners association.

“Instead of tearing it down we want to integrate it into everything new that’s going on in downtown,” Mardian said.

The neighborhood straddles the edges of downtown Reno, Midtown and the Wells Avenue Neighborhood Conservation District. It is one of the cheaper areas of town to rent, according to Johnson Perkins Griffin analysis of average rent in Reno-Sparks.

The contemporary architecture and interior designs come from Cathexes, the firm behind the proposed 17-acre West 2nd District in downtown Reno.

Mardian said the condos will range from studios to two bedroom, two bathroom units that average 760 square feet, but as large as 1,180 square feet. The basement will be converted to private storage. The main floor will include large outdoor patios for first floor residents and covered parking. High ceilings will also add a feature. Pricing has not yet been set.

“Haven’t gotten to that yet because we’re trying to fine-tune the construction costs,” Mardian said. “But we do know the market is for smaller residential units in downtown and Midtown. We’re trying to comply with that aspect of the market.”

The buildings will not include retail, which Mardian said, allows them to convert the use and begin construction more easily. He hopes to begin in October but is waiting for the current office tenant to move. If all goes as planned, the rebuilt condos should be ready to go Fall of 2017.

One block over, HabeRae development continues work converting two buildings: one into Whipple Brewery and Distillery and another into “cool, Mad Men office space with a fitness club and Origins Salon on the ground floor,” according to their website. A few blocks away, HaeBrae also laid out plans for ten small houses in a Tiny Ten community.